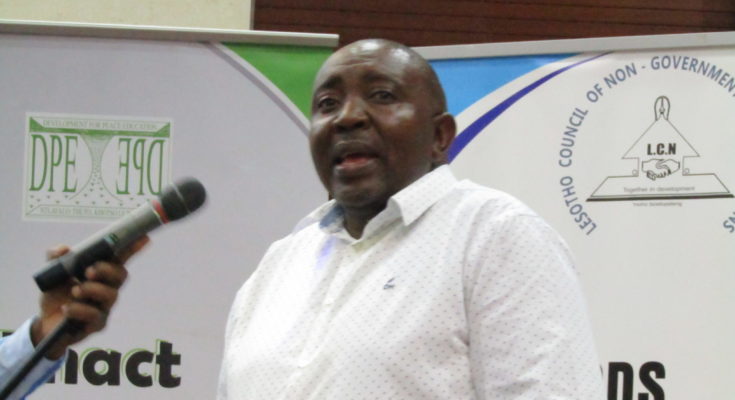 Development for Peace Education (DPE) held a dialogue session at the 20th LCN-NGO week on Wednesday 12th December 2019 at ‘Manthabiseng Convection Centres on the topic Negotiating Section 85 of the Constitution. The organisation has been persistent in the Lesotho reforms processes to facilitate inclusiveness, people driven, participatory and non-elitist reforms.  The organisation engaged directly with the reforms processes and even led other CSOs in these processes.

Given the background DPE conceptualised the reforms process and has been instrumental in the civil society proposals to unblock reforms barriers.  Coming back home of leaders from exile, establishment of the National Dialogue Planning Committee(NDPC) which came in to facilitate dialogue on reforms when government and opposition were in disagreement,  establishment of the National Reforms Authority to shepherd the process post dialogue stage and various public awareness and mobilisation  activities are but few examples of direct and indirect influence of the organisation in the process.  In the similar vein of promoting dialogue on issues which may otherwise cause setback, DPE organised a session on the Section 85 of the Constitution of Lesotho.  This section regulates amendments to the constitution, and it categorises all sections into three for the purposes of amendment;

DPE believes that as Basotho prepare for the NRA, critical questions like popular versus parliamentary supremacy in determining what the constitution contains and whether a new process of public consultation in the form of referendum would be necessary or the consultations be for the purposes of reforms regarded as adequate should be taken head on.

Prof; Hoolo ‘Nyane and Ambassador Kelebone Maope KC (experts in law) engaged with this section for the purposes of debates. Professor ‘Nyane stated that role of parliament in the constitutional amendment may not be circumvented and the idea that consultations be deemed as referendum may not be thoroughly exhausted in the absence of the referendum law.  Since the Section is operationalised by referendum law, there is no way this idea can be entertained in the absence of that law. 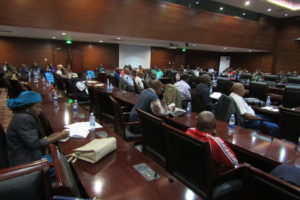 with the constitution and referendum law needs to be in place. He further stated that he supports that the Constitution be overhauled because public views are too many, except that he fears that such an exercise may track for ever. In the military regime it was easy because the military wanted to return to the civilian rule. One of the participants Hon. Lekhetho Rakuoane raised a point that there is a need for amendment of this section for the purpose of a finer constitution. Another participant from CSOs Thabang Maphuroane proposed that Basotho should negotiate hanging this section to allow reforms processes as even the SADC in most cases compels our leaders /parliament to toe the line.  Hon Deputy President stated that parliament represents the people and it should not be seen as threat as it will provide feedback to the people.