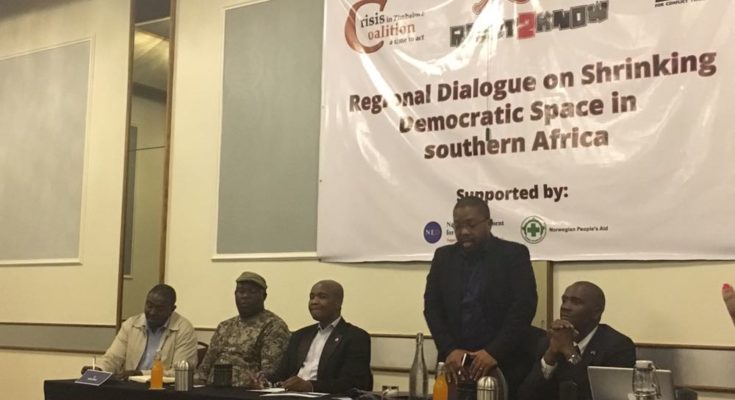 Considering the past and the present, Lesotho still has chance to recover from the shackles it has been identified with in the recent past and reclaim its rightful position in the community of state as peaceful, proud and hopeful. This was said by DPE Coordinator, Sofonea Shale at the regional seminar entitled shrinking democratic space in Southern Africa held on the 6-7 December 2017 in Gauteng South Africa. In his presentation Shale said Lesotho needs restoration of rule of law and to shed of the growing impunity perception among populace. However retribution cannot on its own be a recipe for peaceful future, he warned. “So Basotho can reclaim their pride among nations not only by retribution but application of wisdom that balances between justice and peace. This is called reconciliation and this is not only the magic but also science that only occurs as truth is revealed and remorse that invites forgiveness manifests”. Read the presentation…. The Secretary for Peace, Advocacy, Solidairty and Partnership of Action for Peace and Solidairty(APS) ‘Mamphanya Mahao narrated the ordeal of military torture in the Kingdom which saw many soldiers locked up allegedly for mutiny and former commander being assassinated. 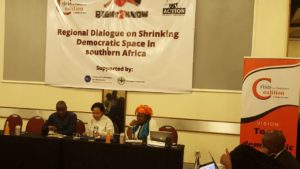 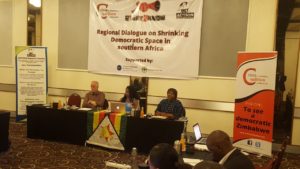 Another country of priority was Zimbabwe which panellists; Prof David Moore from University of Johannesburg, Memory Kadau Acting Director Crisis Zimbabwe Coalition, Elinor Sisulu-Human Rights Defender, Dr Bheki Mpofu-Wits, Sox Chikowero ex-Soldier, Marc Gbafou-African Diaspora Forum, Vimabi Mavherudze-African Youth Forum all agreed that while people may celebrate developments in Zimbabwe, there is a need for common approach to the future of Zimbabwe. Whether people agree or disagree on the definition of the mode through which change came about in Zimbabwe, the fact is that it is state power, military and politicians. The people of Zimbabwe should have right to determine how they should be ruled.

This regional seminar attracted participation from countries identified as countries in trouble or where there is potential loss of gains made; Lesotho, Democratic Republic of Congo, Mozambique, South Africa, Swaziland, Zambia and Zimbabwe. It was organised jointly by Crisis Zimbabwe Coalition, Action Support Centre and Right to know.