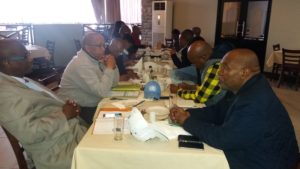 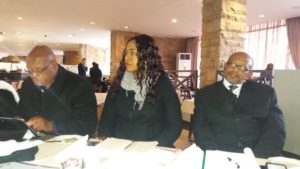 On Wednesday 27th June 2018 DPE met with the Parliament Portfolio Committees for both houses; Senate and the National Assembly to request partnership and support on its work to advance public participation. Public Participation Law enactment has always been an advocacy issue for DPE which can enable citizens to engage on law and budget making processes. In line with that commitment, DPE has the National Community Parliament which is a platform for citizen participation in budget making; the Peoples tribunals which allow for public participation in law and policy-making, and now DPE is working on the accountability side of public expenditure.

On the accountability side, the idea is to form accountability forums at the community level and to connect these forums with/to the different ministries and parliament portfolio committees. DPE had a fruitful discussion with the Chairpersons of these committees when it presented the idea to them.  DPE also discussed the work it has already started of monitoring MPs from the areas where DPE works and their level of participation in the sittings of the house. Further, DPE shared with the house the Ministerial Performance Appraisal Concept that is aimed at improving service delivery and accountability thus complying with the Public Management and Accountability Act, 2011. 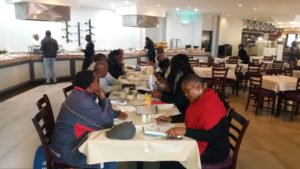 role perfectly taking in to account community participation. The honourable members also appreciated that this will enable them to monitor budget allocations that for a long time have been misused by those trusted to provide services to citizens.They showed interest in the National Community Parliament as a strategy to inform budgeting but were concerned about how ministries include the priority needs identified through the national Community Parliament in their budgets. Other than this members, were interested in the constitutional reforms process and how DPE and the Parliament can collaborate to make it a national issue owned by the citizens through interactions and participation. Generally the consensus is to hold a meeting that will include all committee members.

The meeting was honoured by the presence of the Portfolio Committee Chairs National Assembly -Economic Cluster, Social Cluster Natural Resource and Law and Public safety. The Senate Chair of Chairs, Chief Whip, and two other members and media houses.