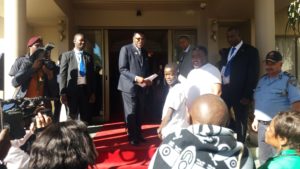 The chairperson of the Southern African People’s Solidarity Network (SAPSN) and Coordinator of Development for Peace Education Mr. Sofonea Shale led a march to handover the communique compiled during the Peoples Summit to the in-coming SADC Chairperson on Friday the 17th August 2018 in Windhoek, Namibia.

While addressing a large crowd gathered at Windhoek Show Grounds and reading from the communiqué to the SADC heads of state and government presented to the incoming chairperson of SADC his Excellency Hage Geingob; Shale said the Southern African People’s Solidarity Network does not want to be asked by SADC leaders whom they are representing and that is why the people who come from all over the SADC region shall engage in a peaceful march to hand over the communiqué themselves.

The communiqué among other issue states that the people have noticed the existence of SADC as a regional economic bloc with a relatively better peace and security dividend in a well-resourced Africa in terms of natural and human resources but burdened with the responsibility to address the threats to peace and human security in specific SADC member states such as the DRC, Zimbabwe and Lesotho where the military and police continue to meddle in politics, in the process violating fundamental human rights.

It further said it that the people are outraged with the systematic abuse of human rights by transnational corporations which are dispossessing the citizens of their land and natural resources, paying slave wages, subjecting workers to slave working conditions and the massacres of the people that have taken place in a number of SADC countries like South Africa, Lesotho and DRC where resistance has occurred.

It therefore called on SADC to put time bound reform Programme for Lesotho to commence reforms in earnest failing to which the regional body should withdraw their support. The communiqué was delivered by SAPSN committee on behalf of over 800 delegates drawn from grassroots social movements, community based organisations, faith based organisations, small scale food producers, women’s organisations, labour, students, youths, children, economic justice, human rights, people with disabilities and other various sectors of social movements gathered at the SADC People Summit convened by the Southern Africa People Solidarity Network (SAPSN) at the Windhoek Show Grounds in Windhoek.