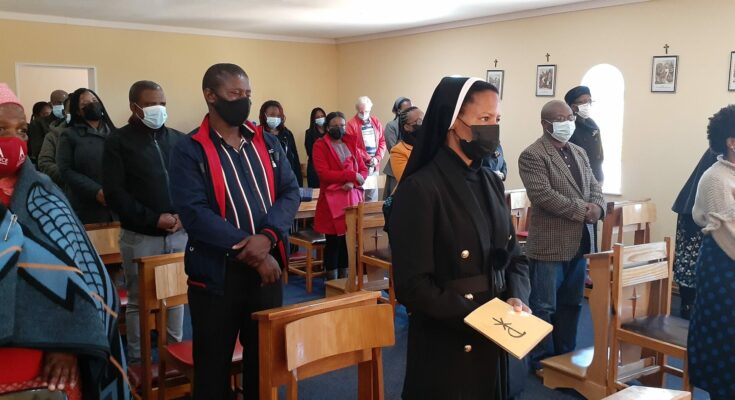 The founder of Development for Peace Education(DPE), Sister Veronica ‘Mapaseka Phafoli was remembered as a hero of the philosophy behind the civil society oganisation advancing citizens’ empowerment through peace education, creating  participation avenues for ordinary citizens in the otherwise abstract governance, policy and legislative processes  at the commemoration dialogue session held at the St Ambrose, home of  congregation of Sisters of Holy names in Mazenod south of the capital Maseru on the 27th April 2022.

In the sermon during the Holy Mass, Reverend Father Valentine Tšepo Mosoeu, the former DPE employee who worked with Sr Veronica and the now National Animator related the brevity of Sri Veronica to that of biblical Veronica who fearlessly sought to clear the face of Christ on the road of the cross to Calvary. He said that her success to establish DPE was derived from the courage she had to serve humanity. “ ‘M’e Veronica was a gentle radical because she addressed difficult issue without losing her temper…” This was corroborated aby other speakers notably Sr Joni who marveled at the patience and wisdom of Sr Veronica, the first Mosotho to be the provincial of the congregation in dealing with her mother when Joni joined the congregation in 1979. Sr Veronica was cool and collected, the approach that enabled the two to go along. Sr Lerato Matobo, commented DPE for reminding them of the hero whose fame has lived for ages after her mark.

The family, friends and civil society acknowledged the special gift Sir Veronica had which was the ability to reach out to the neglected.  When the nephew of Sr Veronica, ‘Mathaisi Thaisi shared how Sr Veronica taught her the prayer of St Francis of Assisi, otherwise known as the prayer of peace, the Director of Ceremonies, the DPE Peace Education Researcher Mookho Mphonyo could not hold it. “We recite this prayer at DPE every morning…. the first time I came here, I found this prayer being said but I did not know why…. today I know why DPE has this prayer said before starting work….” said Mookho bursting into tears.

This was quite an emotional reflection because DPE was challenged to up its game in mediating, brokering solutions and educating for peace.   The Transformation Resource Centre and the other civil society Organisations were urged to stand firm in helping people to live peacefully.

In the message read for him, the chairperson of DPE Mafokane Ramakhula said that for DPE the focus is on how to make sure that the upcoming election remain highly charge, highly competitive yet peaceful. DPE calls upon all to ensure that violence that has rocked the music groups does not spillover to political space as there are early signs to that.

This is the annual event and this year was attended by Transformation Resource Centre, Khathang Tema, Justice and Peace Commission, Lesotho Council of NGOs, HWPL form Pietermaritzburg, Sisters of the Holy names of Jesus and Mary, families of Phafoli, Thaisi, former colleagues of Sr veronica and the public. The commemoration was seen by the analysts as a correlation between the principles of Marie-Rose, the founder of the congregation on empowerment of girl children through education and the idea of Sr Veronica of empowering citizens through peace education.

Sister Veronica founded DPE in 1987 and registered in 1989. She passed on in 1993, leaving the organisation that has stood the test of the time. DPE has tried to stick to the original founding principle. While there are challenges, the organisation seeks to be relevant to the less privileged. Sister Veronica believed that development would only come after accurate social analysis and for it to be accurate, the social analysis must be made by the people themselves. DPE is still too far from this but creating platforms like Community Parliament, People’s Tribunals, Community Voting and Citizens Dialogue where ordinary citizens can make their own input in the otherwise abstract governance, policy and legislative process, is an encouragement for those in the DPE family.  Unique about sister Veronica was her ability to promote self and mutual criticism and helping others to unleash their potential as leaders. This is the yard stick that DPE today should use. Are there any leaders being born and built at DPE?