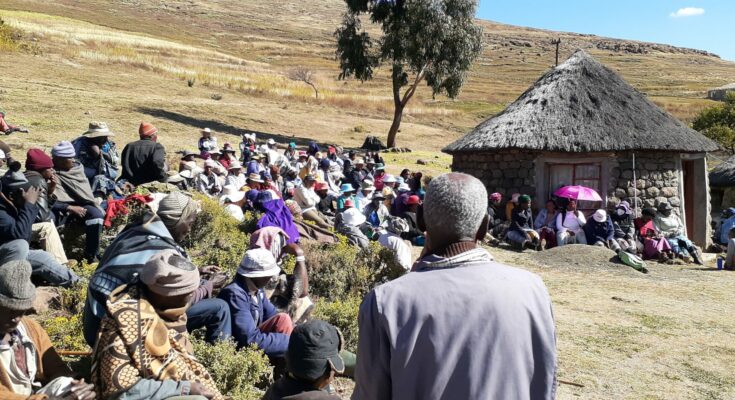 Following the police and the army in the Liseleng road construction camp site beat and forced people to roll on the ground in the dehumanizing ordeal, where some women were seen nude, Development for Peace Education (DPE) rushed to this Lesotho Highlands Water Project area to stand with the weak and the oppressed. “these people cut off power supply to us…. when we sure impatience to their delay to reconnect, they unleashed police and army brutality on us….and finally charged us for causing public violence…” said one villager in the community fact finding session called by DPE in Liseleng.

In the well-attended gathering, DPE heard that the community was affected by the Lesotho Highlands Water

Project Road construction linking the Katse Dam to Polihali dam under phase II of the project.  According to the community, there was a blasting which is not unusual except that this time around there was no community notice usually made seven days ahead to be followed by the 24 hours before evacuating of people and animals. This time that did not happen. The community was shocked to see stones flying off their heads nearly injuring people and animals.  In the word of communities, the blasting resulted in the breaking of electricity poles which left the community without electricity.

The contractor was notified and promised to rectify that but this took well over three weeks.  Villagers report that this sudden power cut and the promise that this shall be attended to promptly has led to the fridges going off with lots of perishables going rotten. They said that on their attempt to demonstrate that their patience is running out, they protested by blocking the road demanding talks which the contractor refused to enter. Instead, he called in the police and the army in the site.  Watch the video here

Villagers report that on their arrival, the police waved to call the community where it was gathered. According to

the villagers, the son of the chief went to meet the police. The police are reported by the communities that they went with the sone of the chief to the camp. “all were of the view that this is leading to the opening of the much-wanted talks…” the gathering told DPE. To the dismay of the villagers, the sone of the chief ‘Was made to roll on the ground, later then to the river to roll in the water and taken to the police station to be locked in wed clothes in the winter of the mountain area…” An angry community of Liseleng told the story. The communities say they were worried about the time he was taking and decided to have some go and find out.  The police reception was to force them to roll down on the road, all women, and men, old and young alike.  “as we rolled we were insulted and beaten with sticks, kicked, scorned and ridiculed….” Said one of the young people who said his mother was found herself nude as all her clothing was torn and stripped by the rolling on the ground.

DPE condemns the human rights violation orchestrated by the police and the army in Liseleng.  This attitude which protects the capital interest at the expense of the people is condemned. DPE has decided to work with Adv, Sekonyela who has acted in defense of the people and further do advocacy to ensure that all the responsible are held accountable. DPE calls upon all the human rights defenders to join hands and ensue that the people are empowered, protected and the government fully accounts and the individuals responsible are held to account.

Following the DPE call, and the several media appearances, the government delegation of Ministers went to the place and denounce the activity. This is commendable but DPE wants more action than words, for this to happen DPE needs additional resources for which it makes a call.