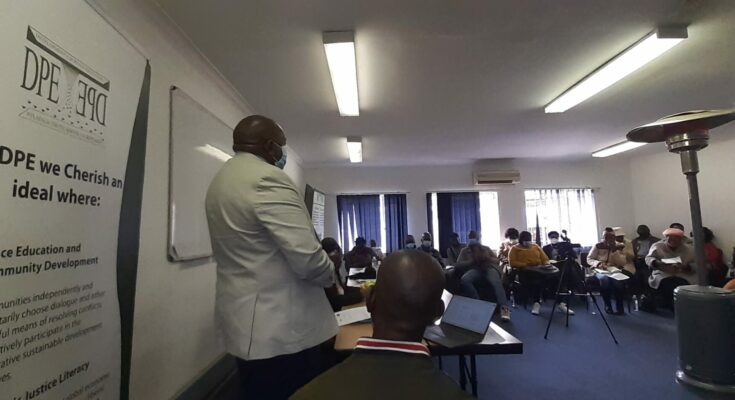 Following the dissolution of National Reforms Authority (NRA) and the growing uncertainty on the protection of the reform work, DPE decided to solicit wisdom from retired citizens on how to protect reforms from the antagonistic and confrontational political leadership to breathe sanity and soberness in the otherwise sensitive process of national importance.

and former senior officers in the police and the army, former Principal Secretaries, former Ambassadors, civil society veterans and the radio phone-in programme regular callers, civil society and media, was officially opened by the former Chief Justice and Former Chairperson of the Independent Electoral Commissioner Justice Mahapela was full of energy, action, interaction, and exchange.

The background of this meeting is that long standing history of DPE and those sectors of society which were not so privileged in the reforms process but were brought closer to the process. This time around DPE as a representative of Citizens Mobilisation Organisations in the defunct NRA called the feed back meeting but also that which will provide platform for participants to inform next steps in protecting the process.

The meeting was addressed by Mr Tšiu Khathibe, who held the position in the now defunct NRA. Khathibe gave progress made by the NRA and gave highlights of the institutions transformed and created by the omnibus Bill. Human Rights Commission, diffusion of power and its redistribution among many hands in the institutions of government. Further there was a presentation that briefed participants that the NRA has been dissolved upon expiry of the extended period. The reaction has been worrying because there is a court case, and the Omnibus Bill from the NRA has been deferred by the portfolio Committee.

In response participants suggested a wide range of views; let the civil society run with the reforms process; Keep the NRA format but reduce the number of politicians in the structure; Let the NRA stand dissolved until it could be seen what happens after elections. Some participants were strong that members of the NRA should know that time does lapse because nothing can live forever. The meeting agreed that the court route may not yield the results conducive for reforms hence leadership should be persuaded to resolve the NRA impasses through talks.

The call was made that a sober approach is necessary to wean reforms from the political entanglements in the parliament to save the Omnibus Bill, protect the process and turn Lesotho into a SADC model state for reforms. DPE shall consolidated the ideas and call for the next meeting.